50/50 Community Marine Biologist, Conservationist, and Author, Rachel Carson, who is said to be the finest nature writer of the 20th Century, said these words… “A child’s world is fresh and new and beautiful, full …

JOINING THE ENVIRONMENTAL FRONTIER Do you remember those moments as a kid where you would get lost in your imagination and create a world where just about anything goes? Well, that was my childhood too, … 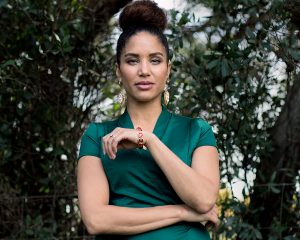 I’m a radio and TV personality, DJ, blogger, producer, influencer and MC. I’ve always had a huge passion for conversation, music and the environment. I consider myself ambitious and via my media career I’ve maintained a loyal audience of fans and followers. I enjoy showcasing memorable events, skin care, health tips, fitness and the environment.

I’m Anchor Presenter for the SABC2 environmental show 50/50 which airs every Monday at 7pm as well as Co-Host on the morning breakfast show on Radio Tygerberg104FM weekdays 6 to 9am.

Currently I am also Celebrity Ambassador for WWFSA – The World Wide Fund for Nature and in 2019 I won the #PlasticFreeMzanzi initiative and walked away with the title ‘Most Influential Plastic Free Mzanzi Campaigner’. In the same year I was also listed as one of the top environmental influencers in the country by Treeshake as well as campaigning with Greenpop's 'plant a tree' project and the MPact Recycling campaign.

My love for music has seen me perform and showcase my talent in various venues as a DJ. I am also part of the first proudly South African online platform dedicated to inspiring women and up and coming female DJ’s through connecting with each other via my role as a Sweet Beats DJ Ambassador for the Strawberry Lips Tequila Sweet Beats Campaign.

I’m Co-Founder for Mycelium Media Colab, a network based media company that uses storytelling to create a healthier world within the sustainability field. I’ve also met and interviewed many personalities such as Chef Gordan Ramsay, Pastry Chef extraordinaire Eric Lanlard, actor and comedian John Cleese as well as shared the stage with Kumi Naidoo, the Secretary General of Amnesty International and previous head of Greenpeace, Africa.

In 2011, I campaigned across my TV, radio and social media platforms to put Table Mountain on the map where it became listed as one of the seven wonders of nature and in 2017 I was a key contributor and maintained second place in the world for the HeardPSA initiative, which was in partnership with CNN and the Global Sustainability Network. The judging panel included Wesley Snipes, Joseph Fiennes, Olivier Martinez and feature film director Philip Boston. The focus for the initiative was on human trafficking to highlight ‘My Freedom Day.’ In 2019 the same Heard PSA won Best Director, Best Documentary and Best Film in the 1MinuteFilmFestival in Sofia, Bulgaria.

For my on air background I was chosen as one of the initial presenters for the Expresso Morning Show on SABC 3 and have presented on many other radio and TV platforms inclusive of Radio 2000, MetroFM, SAfm, KFM and GoodhopeFM.

I believe in the balance of healthy living and am Muaythai ambassador for two-time Muaythai World Champion Quentin Chong's Dragon Power Muaythai, MMA and Fitness Centre.
Growing up I was a nerd who enjoyed reading books, enthralled by the creative world of words. Years later I became the extrovert I am today and have found that blogging allows me the freedom to explore my passion and showcase a variety of brands that I resonate with.